Sometimes it’s really difficult to raise children and show them how to find their way! My son struggles with his emotions and has a hard time dealing with all the difficult issues going on in his life. Together we have been through so much that it boggles my mind…addiction, divorce, major health issues of family members, etc! I can’t even begin to imagine how he feels!

Since he didn’t know how to handle these difficult problems, he chose to suppress his sadness to the point where he doesn’t allow himself to feel any thing positive or negative. I have been taking him to counseling in the hopes that we can somehow tap into his thinking. His counselor is a really interesting guy. He takes everything from a scientific approach with my son. This is the right way to go with him because he values intelligence. The counselor described my son’s flat affect approach to handling his feelings by using a “sine graph”. There are ups and downs on the graph that are equally opposite of each other. The ups represent the positive feelings and the downs represent the negative feelings. My child shuts himself down so he doesn’t feel the negativity in his life. He’s been through a lot and he doesn’t like the emotions that are stirred up, so he chooses not to feel them. The doctor described this as clipping. He said when we shut down one side of the graph we also do it to the opposite side. If we don’t feel the extreme sadness we don’t feel the extreme happiness either. He says, “Anyways that’s what science says.” I said to my son, “Do you realize when the doctor asked you what the good was going on in your life that you didn’t have an answer?” He didn’t respond at that moment, but his actions later actions showed me he understood. Somehow this little bit of science tapped into his thinking.

On the way home from the appointment my teenage son was texting with his girlfriend. He was telling her about the sine graph. I asked him what he thought about that. He told me, “That’s what I do. I shut down.” He told me he didn’t realize that he was shutting down both feelings.

We were hungry so we decided to go to Arby’s. We sat there and chatted. He tried my salad and said it was good. At this point in time he decided to let me in and tell me about how hard it is to see his dad suffer since he lost his left leg after his heart attack. My son shared with me that his dad reminisces about what life was like before the amputation and lives in the past. He sees a depressed man who doesn’t want to live anymore. He told me, “It’s sad to see someone give up!” I really understood his thinking because it was hard for me to let go of his actions before our divorce. I wanted him to be healthy in order to prevent all the health issues that have now happened. He acknowledged and we sat quietly.

After a bit, I asked my son, “Do you want to hear a story from when I was your age that took place in this Arby’s?” He said sure. When I was your age at 17 my friend Debbie and I would go to the teen dance night at the roller skating rink. One time when it ended we came here to this exact Arby’s. Little did I know my friend would start a food fight. At first it was just french fries, but right before we left she grabbed a bottle of horsey sauce and squirted it all over some dude’s chest. I remember the look of shock on his face!!! He was dumbfounded at her behavior. A full on food fight started! I remember saying, “Debbie we gotta get out of here!” At that moment He got the biggest smile on his face and we laughed together! He couldn’t believe that his mom was involved in something like this! To be honest with you I couldn’t believe it either! After this snack we came home and did our own thing for a few hours. I made us chicken and salad for dinner and we watched “The Blue’s Brothers” movie since he wanted to see an older movie and I figured he would like it! We laughed a lot and had a great time! What a great day with my son! I felt like he was finally living in the present and enjoying life. Before I went to bed that night, I told my child “I had a great day with you! This was fun!” He said, “Me too Mama!” 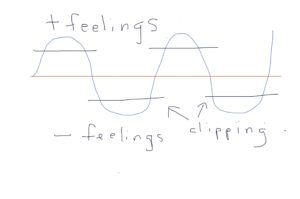